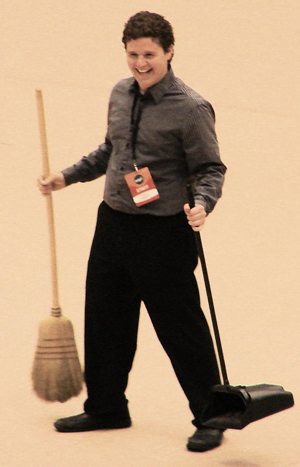 Sometimes the most mundane things can grow and take on a life of their own.  Such is the case for what has become one of the new traditions of WGI Percussion World Class Finals:  The sweeping of the floor between classes.  We caught up with the “man with the broom,” Andrew Blankenship, to learn more about his role as a World Championships Volunteer.

Andrew hails from the Los Angeles area, and joined the drum line in high school.  He talked about his scholastic days.  “We performed in the local circuit and WGI regionals but never made it to Dayton.  During college, I instructed and wanted to become more involved in WGI because of how it perpetuated my desire for the marching arts.”

In 2009 he decided to become a Championships Volunteer, and the rest is history.  During his six years working at Championships, he has had one primary role.  He explained “In my first year, they put me to work as a Starter at Nutter Center, and I have been doing that ever since.  They like the way I interacted with the ensembles.  I try to be very hospitable.”

Andrew elaborated on the importance of making the units feel at ease.  “That’s part of the job, to make the groups feel welcome and create a Championship atmosphere.  The Starter is the one backstage who pulls the curtain and gets the flow of show going.  I get the ensemble to the boundary line to help the Timing and Penalties judges as they are getting the prior group out of the exit.”

“The broom” got started innocently enough.  Blankenship explained “It started in 2011.  There was a continuous amount of debris that came onto the floor.  Through every break, Mark Thurston and I cleaned the floor.  In PIW finals, we continued the routine but Mark didn’t go out with me.  I heard the crowd start to cheer, and thought the next group was coming through the curtain.  I looked up and turned red in the face.”  A star was born.

Some of his favorite moments are right before a unit takes the floor.  “What I enjoy most about the behind the scenes experience is the culmination of all the teamwork right before the finals performance, knowing that the ensemble has put in hundreds of hours and thousands of dollars for this experience.  Seeing that last moment of bonding before the curtain opens, and for some people who are aging out… being able to experience it with them.  That’s what makes it all worth it for me.”

Away from the activity, Andrew is a baseball fan and holds Dodgers season tickets.  His real passion is serving others, and he has decided to make that calling his life’s work.  “I’ve done a lot of missionary work the last four years.  I have visited Zimbabwe, Haiti, and Italy.  I am going back to all three this summer.  I actually started a business about 18 months ago to help fund missionary projects.  The name of my business is Walk the Talk.”

Andrew’s smile and friendly manner can make even the most nervous unit feel right at home.  With his zest for helping others, we can be sure he will be helping anxious groups enter the arena for the performance of their lives for years to come.