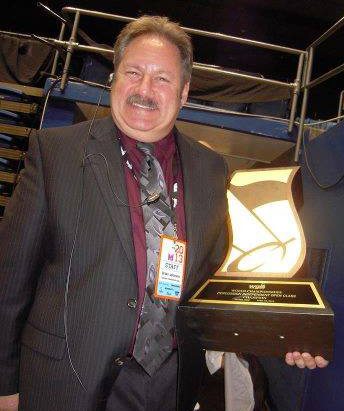 St. Paul, MN’s Brian Johnson has been involved in the marching arts for a long time.  Currently, he is the drill designer for the University of Minnesota Marching Band.  Prior to that he directed the South St. Paul Marching Band, the Rosettes Color Guard, and has been past President of the North Star Color Guard Circuit.

Years ago when he had a competitive unit in the Midwest, he met Contest Administrator Tom Hachmeister, who became a friend.  Brian got involved with the Midwest Color Guard Regional.  He remembered “When the Percussion Regional came along, Tom needed someone to run the site and he asked me.  I was asked to run the Minnesota Regional when it moved from Wisconsin.”

Johnson got involved as a Championships volunteer back in the early 1980s after meeting Lynne and George Lindstrom when Finals were held in Nashville.   He explained how that meeting led to his association with WGI.  “The following year I volunteered for Championships.  I was always in the tent as the equipment guy.  Then they asked me to assist at Championships in a different capacity.  I was also asked to run shows for WGI at larger events.  That slowly developed into what I do now.”

He has accepted greater responsibility over the years, and mentioned the late Harvey Wingo as a mentor who helped train him in his current role.  “I am a Contest Administrator for WGI.  I do both Color Guard and Percussion.  Only Dave Priester and I do both.  I am also the Site Manager for UD Arena for both Color Guard and Percussion, and have done that since Harvey passed away.”

When listing his duties during the Championship weekends, it would be easier to list what he doesn’t do instead of what he does do.  He explained “I represent WGI to UD Arena.  We try to take care of the building to maintain great relationships with the UD Arena staff. They are friends of mine that I see twice a year.  I have access to the entire UD Arena staff on a first name basis, including ticketing, security, and maintenance people.” 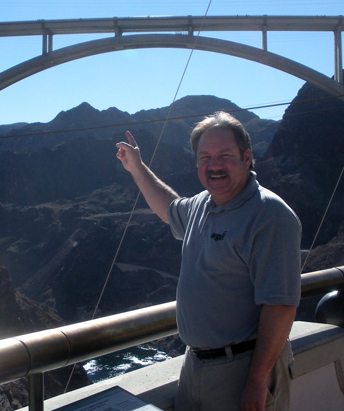 He continued, “I am the point person for everything from the toilet being full to taking glitter off the mats in back.  Basically anything that happens here goes through me.  When tabulation needs something they come to me first.  It’s my job to get an answer as quickly as possible to resolve issues.”

Over the years he has developed an uncanny ability to spot potential issues before they become issues.  “I have a knack to wander around and find problems.  I’m able to fix them or adjust them satisfactorily.  It’s a sense of knowing what time of day there may be an issue.  I’m usually the first one in the building and one of last ones out during both weekends of Championships.”

He also pointed out that assigning duties that fit the strengths of the people on his crew is a large part of his job.  “Lots of it is delegating and making sure I have people in the right spots.  I work with great people.  We want people who care about the kids and love the activity.”

Johnson loves to travel when away from the activity.  “I go to Vegas.  My mother lives there.  I’ve gone to a different country every year since I turned 50.  I’ve been to Japan, Germany, and Austria for example.  I still love to teach.  I’m a mover.  I volunteer for DCI and Youth in Music in Minnesota.  I get charged by doing this (working on behalf of WGI).  I care about the kids and that’s why I’m here.”