“Caught Off Guard” is a monthly feature that takes a close look at what individual members of WGI ensembles do outside of marching. Keep an eye out for similar stories called “Out of (Drum)Line,” If you know someone marching a WGI ensemble, who also has a unique job or hobby, email [email protected]

Alisa Max is in her second year spinning rifle and flag for Field of View “A.” Previously, she had marched in guard all four years at Penncrest HS in Media, PA, where she also played flute.

She’s enjoyed riding horses for almost 14 years and has competed about seven years in equestrian events organized by individual horse barns. The competitions involve getting up early, driving while towing a horse trailer, getting in a ring with about 20 other equestrians, warming up and repeatedly going over the jumps on each particular course on the particular farm. She walks her horse around to the jumps, letting the horse sniff at the jumps, which usually calms it down.

It’s a stressful time, and it doesn’t get any less stressful when everyone else leaves the ring and the competitors enter the competition space one at a time. Alisa may be entered in one of two types of shows: In a Jumper show, she has to contend with trying for the fastest time over 10 to 12 jumps, with each jumping mistake assessed a penalty. (Penalties are given when rails are knocked down or if the horse refuses to jump.) In a Hunter Show, the judges focus on style, how the horse looks and how it moves. (The score goes down if the horse’s positioning isn’t correct, or if the horse gets skittish.) Alisa has been a champion in both types of competitions, with a variety of horses.

It’s not inexpensive to be a competitive equestrian. Uniforms can cost from $500 to $1,500 for the horse and the rider; including boots, pants, jacket, undershirt, helmet, and other small accessories. The contests cost an average of $300 each, which covers registration for the many different classes in which one chooses to compete in…typically three to five classes of differing difficulty levels.

To save some riding fees while preparing for the contests, Alisa has found that she can train horses in exchange for the opportunity to ride, and she has also rented her instructors’ horses. She’s found that horses are sensitive to how she’s feeling: They respect her more if she’s aggressive and they’ll try to accomplish the task at hand. But if she were to be timid with the horses, they would do whatever they want. She compares that with guard, saying, “If you’re timid in guard, you’ll mess up or get hurt.” 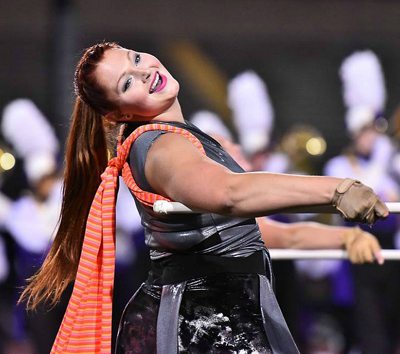 Is it dangerous? Sure. Even with the requirement that equestrians have to wear helmets, one can get a concussion from hitting the ground, getting stepped on, and getting scraped up. Alisa admits it happens to everyone if they’ve been riding long enough. And bigger horses stress more of a rider’s muscles, making it easier to get hurt. There are some similarities between equestrian competition injuries and color guard injuries: If one gets hurt, they have to keep going; not quitting until they’re off the floor.

Alisa claims, “Guard helps me with the mental aspect of riding, to keep going when something’s not perfect, to finish off what I start. On the other hand, riding horses has given me the confidence to do guard. I figure if I can control a 1,200-pound animal, I can throw a flag without too many issues. In both activities, one can do something right 100 times, but when the moment comes, it doesn’t always work out the way it did before.

“Horse people are interested in my involvement in color guard. They’re curious about how it works because it’s so different from the equestrian activities. I tell them it’s physically different, but it’s quite similar mentally. Like horseback riding, guard is about learning and applying techniques. They ask if I get paid to do it; but like riding, you have to buy the uniform and the equipment. And then you go compete just because you love to compete.”

Alisa says she’s learned a lot about herself and life from both equestrian and guard activities, such as how to handle mistakes and then move on, adding, “You’ve got to not let mistakes ruin everything else.”