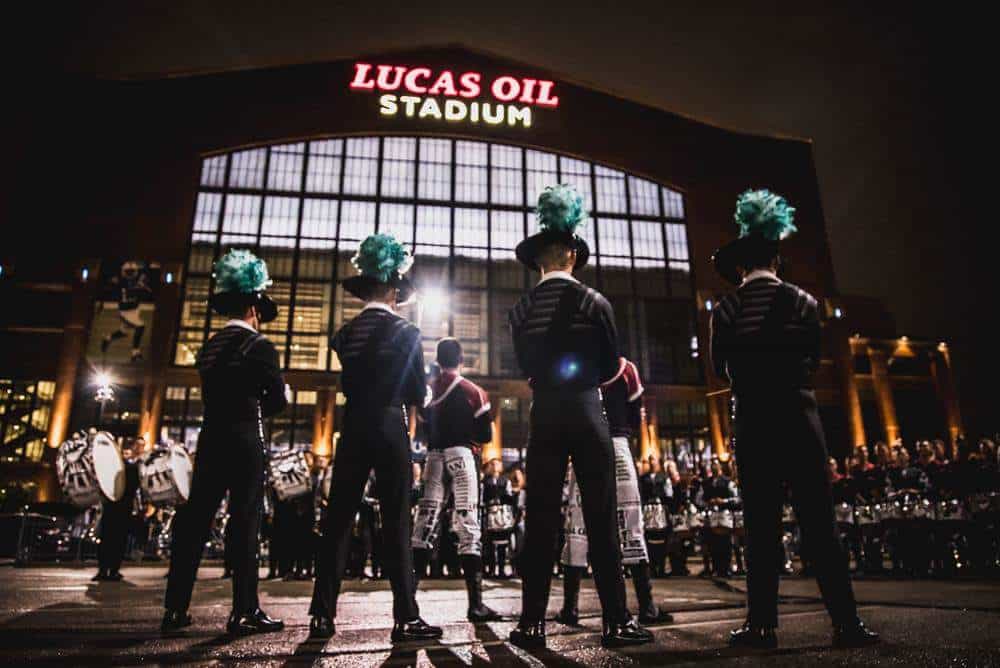 Drum Corps season is upon us! WGI fans can expect to see some familiar faces on the field at DCI events this summer. Here are the groups to watch!

A four-time WGI Percussion World Champion, Denver’s Blue Knights was founded in 1958 by former vaudeville comedians and musicians, Fred and Faye Taylor. Recognized for innovation in visual design and contemporary programing, the corps has been a Drum Corps International World Championship finalist more than 20 times. Operating under Ascend Performing Arts, the organization also sponsors other ensembles including an award-winning indoor percussion ensemble and the first-ever NFL drum line, the Stampede.

WGI’s RCC counterpart, Blue Devils, was founded in 1970 from a drum and bell corps. The Blue Devils hold the record for the most Drum Corps International World Championship titles. The corps has won a total of 17 times, most recently in 2015, and has not placed lower than fourth in the last 20 years. BD Performing Arts organization sponsors The Blue Devils and a variety of performing arts ensembles including two Open Class drum corps.

OC Indoor’s parent organization, Oregon Crusaders, was originally founded in the 1970s. The Portland-based Oregon Crusaders are two-time Drum Corps International World Champions, in 2004 (Division III) and in 2012 (Open Class). “OC” is the most recent drum corps to join DCI’s World Class division, and operates successful indoor percussion and color guard programs during the winter months. OC is proud to represent the highest quality in “Performance Art” for Pacific Northwest music students and for audiences across the country.

Before it was a DCI Open Class drum corps, Anoka, Minnesota’s River City Rhythm got its start as a percussion ensemble. RCR is a four-time“Fan-Favorite” award winner in WGI’s Independent Open division. In 2015, RCR expanded into a drum and bugle corps, taking the field as part of the DCI Tour, making Open Class Finals in both of their first two seasons.

WGI’s Pioneer Indoor shares an association with Pioneer Drum and Bugle Corps. Founded in 1961, Pioneer hails from Milwaukee, Wisconsin with a long and established history in Drum Corps International competition. The corps was a World Championship winner in its class in 1991, 1994 and 1995 before joining DCI’s World Class division in 1997. Truly a corps with no borders, Pioneer annually hosts members from a number of foreign countries among its ranks. Following performances, audiences will often hear the corps’ unmistakable “Garry Owen March,” as performers proudly troop the stands li

Operated under the same nonprofit organization as WGI 5Points Percussion, DCI Open Class corps Guardians, was founded in 2013 to participate as part of Drum Corps International’s SoundSport performance initiative. Guardians made its debut as part of DCI’s Open Class division in 2014. The corps prides itself on offering an affordable and positive drum corps experience to youth throughout central Texas. 2016 marked the very first time the corps competed outside of the Lone Star State, including an inaugural trip to the DCI World Championships in August.

Representing California’s San Joaquin Valley, Golden Empire was founded to give youth the opportunity to further their skills in brass, percussion and visual performance. The drum corps is an extension of the Bakersfield College Drumline program and took the field for the first time in 2014 as part of Drum Corps International’s Open Class.

Shadow Indoor Percussion is the WGI performance arm of DCI Open Class corps Shadow. Shadow is an organization with a genesis all the way back in 1972. Starting as the Oregon High School Summer Marching Band, the group performed as part of the Mid-America Competing Band Directors Association. As that competitive circuit grew smaller over many years, staff members saw participation in the annual DCI Tour as a way to keep students involved throughout the summer while continuing the rich history of the organization. 2016 marks the group’s first as an Open Class drum corps.

Crossmen Winds had a great inagural season with WGI. Watch their DCI-affiliated group, Crossmen, this season as they rock the field. Crossmen first took the field in 1975 as a successful merger between two smaller suburban Philadelphia corps, the Keystone Regiment and the 507 Hornets. As an east coast organization since its founding, the corps moved its operations cross-country to San Antonio in 2006. Crossmen has been a Drum Corps International World Championship finalist 25 times.