One of the 17 victims of the Stoneman Douglas High School shooting Wednesday would likely have competed here in Dayton for the 2018 Winter Guard International competition held in April each year at U.D. Arena.

Gina Montalto, a 14-year-old freshman, was identified by the Broward County Sheriff’s Office Thursday as one one of the victims. 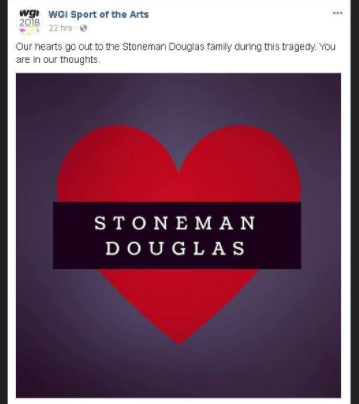 Montalto served on the school’s winter guard team, according to the Miami Herald.

She died late Wednesday night, friends and family confirmed on social media. Montalto had been missing after the shooting and was not answering her phone, according to the Miami Herald report.

One of her color guard instructors from middle school, Manuel Miranda, posted about her death Wednesday night.

“My heart is broken into pieces. I will forever remember you my sweet angel,” Miranda told the Miami Herald. Miranda taught Montalto last year at Westglades Middle School in Broward. “She was the sweetest soul ever. She was kind, caring always smiling and wanting to help.”

The Stoneman Douglas winter guard group was scheduled to perform at a regional event in Tampa this weekend.

The high school was in Dayton in April 2017 for the Scholastic World WGI competition.

2017 roster of schools that competed in the WGI competition at UD Arena. One of the Florida school shooting victims likely would have attended the same event in April 2018.

“As an organization, WGI Sport of the Arts is deeply saddened to hear of the loss of lives in this senseless act of violence. One of these lives being a WGI performer certainly brings this tragedy even closer to the hearts of the thousands of participants across the world in the marching arts. All of our hearts are broken. We are sick with sadness at all those suffering at Stoneman Douglas, but what remains of our broken hearts belong to the students, parents, teachers, and first responders.”

WGI Sport of the Arts posted a heart encircling the school’s name on its Facebook page.