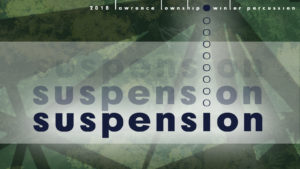 The Lawrence Township Winter Percussion Ensemble, under the direction of Neal Titus, is presenting their 2018 production entitled, ‘Suspension’, a re-imagining of the Tacoma Narrows tragedy.

Lawrence Township will perform at various IPA (Indiana Percussion Association) shows and WGI shows shown below. Tickets will vary in pricing and will be available the day of each performance at the Box Office of the performance location.

The 1940 Tacoma Narrows Bridge was a suspension bridge in the state of Washington that dramatically collapsed on November 7, 1940. The road of the bridge twisted and vibrated violently under the 40-mile-per-hour winds on the day of the collapse.

Lawrence Township will be telling the story of man vs. nature and construction vs. deconstruction through Front Ensemble Arranger Craig Loeffler’s soundtrack of a unique musical selection. Musical selections include Particles of the Universe by American composers Dan Romer and Behn Zeitlin, Alan and Uboats by French film composer Alexandre Desplat, and more.