With 65 ensembles competing in Scholastic Marching A Prelims, it was quite a chore to become one of the following 15 lines to advance into Finals. 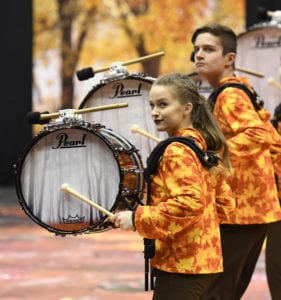 Plainfield HS (Gold Medal – 96.225) took to the floor with autumnal colors and piles of dropped leaves in “Fall,” a salute to the season of change that brings much of nature’s life to a close to make room for new birth. As winter approached, the sounds of a chilled wind permeated the surroundings as a winter harbinger dressed in icy colors released glitter as snow. At the end, the member playing the part of the advancing winter pulled up her hood to demonstrate that the season of fall was over and the domain of winter was now fully in charge.

“When It Ends” by Irondale HS (Silver Medal – 94.675) started with the joy of new life, offering a feeling of happiness without alluding to the pain that often follows as one grows up into adulthood. Although one tries to forget the hardships of growing up, there is no recourse and one must slog through the bad times to get to the good times. References were made to the end of pain as well as the end of joy, but it was all seen as inevitable moments to be embraced for the new experiences offered rather than fear for the loss of all that which was previously known. In short, all experiences are valued for being unique.

Dorman HS (Bronze Medal – 94.638) told the story of an apple tree in the forest in “And the Tree Was Happy.” An abstraction of the tree was the centerpiece of the production, the tree being very giving of its fruit and its branches, which were gradually stripped off by the local citizens. And yet the tree remained happy, as it slowly became a shell of its former self. By the end, the tree was nothing but a stump, expressing regret that its generosity was abused. Still, the tree remained happy when those who stripped it bare utilized its stump to sit upon. 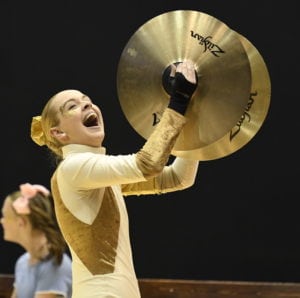 The playing of children was witnessed with the Unionville HS (4th – 92.875) production of “We All Fall Down,” referencing the children’s nursery rhyme of “Ring Around the Rosey,” which was heard in the mallets. As the children grew up, the park bench that earlier was an object of play became the site where the grown man proposed to his girlfriend, followed by a soulful musing of an electric guitar. Towards the end, the man, now old and balancing on a cane, made his way to the bench to watch the new generation of children play as he had once done.

At the start of the Clover HS (5th – 92.563) production of “Beyond the Thorns,” we heard that we are all made stronger by the thorns we face throughout our lives. Numerous branches of thorns were set across the floor, the drums having to navigate around them much as we have to navigate around the obstacles that crop up in our daily lives. A femme fatale in red tried her best to escape the encroaching thorns. At the end, she turned into a debutante, just as a wall of roses bloomed to show that not only does every rose have its thorns, but every thorn has its rose.

A variety of colorful tubes enhanced the Bellbrook HS (6th – 91.850) production of “Tubular.” Tubes of various sizes were struck by paddles to create a “woomph” sound, both in individual pods of tubes and individual tubes attached to the mallet keyboards. Numerous players performed on individually hung chimes to create the melody of Mike Oldfield’s “Tubular Chimes.” Drummers also played on Boomwhackers, leading to the sudden appearance of one of those tall inflatable tube creatures held aloft by a powerful fan.

Sunlake HS (7th – 90.838) “Let Me Go” was an introspective program, dwelling on the angst of a woman sensing she was losing her lover. While the theme of the show was tied together by occasional narration, it wasn’t beholden to the text, but instead utilized the words as a roadmap to hold together the segue segments of the music, which seemed to alternately express emotions of loss, rage, acceptance, and emotional ambivalence created by a confusion of not being sure of one’s true feelings. 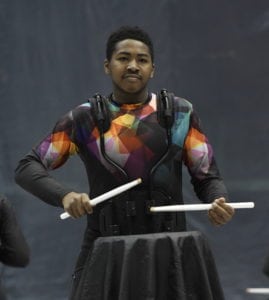 McGavock HS (8th – 89.625) started “Uncover You” with covers over the drums, keyboards, and some performers by way of blindfolds and silks covering the heads of drummers. An explosion of color ended the show with lit drums, long colorful banners, and other silks suddenly filling the floor with a visual joy that could only be expressed once the shackles of being covered physically and mentally were removed. The covering of one’s being, not seen, was perhaps suggested even stronger than that which was seen. Released from all covers, the sky was the limit.

With a full industrial kitchen set up, “Chef” of Temple City HS (9th – 88.763) started cooking with members pouring out of the over-sized refrigerator and duo ranges. A pan of pizza was tossed through the air, as were other huge food items. The opening of French music set the scene of a continental bistro. A color change made possible by aprons led into a couple overcooked snare drummers diddling away inside the ovens. At the end, a couple sat down at a prepared table to enjoy the fruits of the chefs’ labors, which surely were as tasty as the show was delightful.

“Evolution” of Mechanicsburg HS (10th – 88.525) started out quite primal, with aboriginal-like drumming the musical equivalent of a grunt. Battery members beat on drums with animal skin designs to further drive home the primordial ooze-like nature of the earliest drumming. Quickly, the music time-travelled through the millennia to music’s classical era and eventually to that of our current time, the covers stripped off the stationary drums to reveal glistening shells visually throbbing like pulsars in deep space.

“Seasons Always Change” of Southern Regional HS (11th – 87.513) was a show of lovely and evocative music literally rooted in the more tender side of a drum line that often never gets exposed. Never bombastic, the show reveled in its subtleties. At the end, the drummers rested prone on the floor, sprouting out from a lit tree as if roots taking hold in the soil. This was one of those programs where one preferred to sit back, perhaps slouch a bit in their seat, and watch the seasons float by as the leaves changed color in front of their eyes. 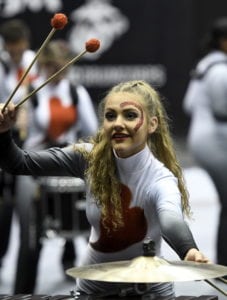 The audience expected something unique when Pearl HS (12th – 87.375) set up its grounded percussion in a sort of arc segment of a Fibonacci sequence. “Fade” explored memories. The concept of the show was rather reflective, though not morosely so. The music slowly faded into oblivion, leaving us with the sense that our lives were a continual pleasant experience; even if we didn’t remember it all.

Set in an underwater wonderland of glowing coral heads and sunken colonnades, the “Atlantis” program of Central Dauphin HS (13th – 87.138) put on its gills and explored the vast unknown of the world’s deep seas. Lighting the deep with bands of white on the drums and glowing crystals reaching out of the depths, the show beautifully presented the wonders of the unknown in a manner far more captivating than eerie. An angelic voice accompanied much of the exploration as if one of Homer’s captivating Sirens of yore calling sailors to their ultimate fate.

“Flight” of Mansfield HS (14th – 85.925) followed the process of flight into Dayton for the World Championships, the drums forming the outline of a plane at the beginning of the show. Despite looking at flight as a thing of wonder, the show did bump into some turbulence, requiring the audience to fasten their collective seatbelts. The final approach into Dayton was without incident, and upon landing, long banners were tossed into the air as if in celebration. This was a most appropriate show considering Dayton is the home of the Wright Brothers, a fact likely not lost on the creators.

“The Stars That Define Us” of Minooka Community HS (15th – 85.650) referenced songs about heavenly bodies, such as “Twinkle, Twinkle” and “Ain’t No Sunshine When She’s Gone.” Not overly heavy on programmatic literalism, the show left much of how stars define us to our own personal interpretation. The program ended with a large black tarp covering the entire ensemble, with a single lit star poking out to illuminate the night sky, further suggesting that the concept of stars defining us is whatever we make of it. And granted, there are things less awe-inspiring than stars that define our every day.