SPIRIT WINTER PERCUSSION EMBARKS ON ANOTHER JOURNEY TOWARDS EXCELLENCE, EXPLORING THE QUESTION, WHICH FORMS WHICH—MAN OR ENVIRONMENT?

Spirit Winter Percussion, defending WGI Independent Open Silver Medalists, delve into their 2017 show, exploring the question – Does your ENVIRONMENT form you, or do YOU form your Environment? This Cape Cod-based ensemble of 27 members ages 12-22, embark on a journey to explore this age-old question in the context of Russia; both the strength and audacity of the people, and their expansive, diverse environment. This thought-provoking program leads members and audience alike to ponder in depth this philosophical question.

The show opens in a pensive manner with a cadenza of the violin solo from Rimsky-Korsakov’s Scheherazade, posing the question: Have the Russian people always been tough, strong, long standing, or did their harsh environment form them to become sturdy and enduring? Rachmaninoff’s Symphonic Dances brings an invigorating energy to the floor, portraying the multifaceted strength that is the epitome of the Russian people. In the second book, time is suspended with Rachmaninoff’s Rhapsody on a Theme of Paganini, showing in equal strength the magnitude and colossal beauty of the environment. Khachaturian’s Lezginka from the Gayane Suite and an arrangement of Rimsky-Korsakov’s Scheherazade further the debate. Scholars have explored this concept for hundreds of years, continually drawing inconclusive results. In the end, the question has been stated and it is up to each individual to come to their own conclusions.

A unique aspect of Spirit WP is that members play an integral part in the design process, and participate in studies about Russia, presenting projects and learning from guest speakers – a crucial part of the show’s development. This allows members to take on a more comprehensive understanding of the production, strengthening their individual performance and their commitment to excellence, passion, and teamwork.

The ensemble will compete at the WGI Trumbull Regionals on March 4, the Toms River Power Regionals in New Jersey March 25 & 26, and at the WGI World Championships in Dayton, OH in April. They will also compete in the NESBA competition circuit February 25 in Dartmouth, MA, February 26 in Tewksbury, MA, March 11 in Dartmouth, MA, and the NESBA Championships on April 1 in Worchester, MA. Learn more about Spirit’s competition schedule.

Spirit Winter Percussion (www.spiritwp.org), is a Cape Cod-based ensemble under the direction of Richard K. Pugsley (Director) and Ian Hale (Ensemble Director). Every year the group immerses itself in a richly educational process of developing a dynamic indoor show combining music, marching, dance and drama in an explosively energetic art form. The season culminates at the WGI World Championships in Dayton, Ohio, where Spirit earned the Gold medal in their division in 2012, the Bronze in 2013, advanced to the Open Class division in 2014, earned the Gold medal in that division in 2015 and most recently, won the Silver medal in 2016.

In addition to teaching the rudiments of music and marching, the experience of Winter Percussion helps young people to develop essential life skills of leadership, teamwork, discipline, empathy, and respect. Spirit Winter Percussion is open to any young person under age 22, and provides members with an experienced and dedicated staff of instructors, life coaches, mentors and alumni dedicated to Giving Back and helping the impossible become possible. The ensemble regularly offers school assemblies and public performances for the wider community on Cape Cod, and hosts an annual Day of Percussion featuring world-class percussion artists for a day of free clinics and performances offered to students throughout New England.

Richard K. Pugsley, Director, began working with Spirit of America in 1993.The Spirit Winter Percussion ensemble was instituted under his tenure, and he led the group to their gold medal win at the Winter Guard International World Championships in 2012, the bronze in 2013, their advancement into Open Class in 2014, their gold medal win in the Open Class in 2015, and their silver in 2016. He has led Spirit of America on tours and conducted workshops in schools around the world, including cultural and musical exchanges in South Africa, South Korea, Australia, Canada, and the United States. He founded the annual Day of Percussion on Cape Cod, a music education event that draws students from across New England for a free day of percussion clinics and performances by world-class artists. He received his Bachelor of Music degree, with a minor in Community Music, from Oberlin Conservatory.

Ian Hale, Percussion Director, studied with Dr. Glenn Price at the University of Calgary where he received his BA in percussion performance, and received his MA from the University of Massachusetts at Amherst, where he studied with Eduardo Leandro and Thom Hannum. He has studied marimba with Leigh Howard Stevens, Gordon Stout, and She-e-Wu. He has taught percussion for the Glassmen, the Magic of Orlando, the Madison Scouts, Carolina Crown, the Cadets, and is presently on staff with the Boston Crusaders Drum & Bugle Corps. Ian was also a music faculty member at the University of Massachusetts at Amherst and Assistant Director of Bands for the Calgary Stampede Show band. He currently teaches and arranges for numerous bands and percussion ensembles across the United States and Canada. Ian is endorsed by Vic Firth, Remo, and Zildjian. 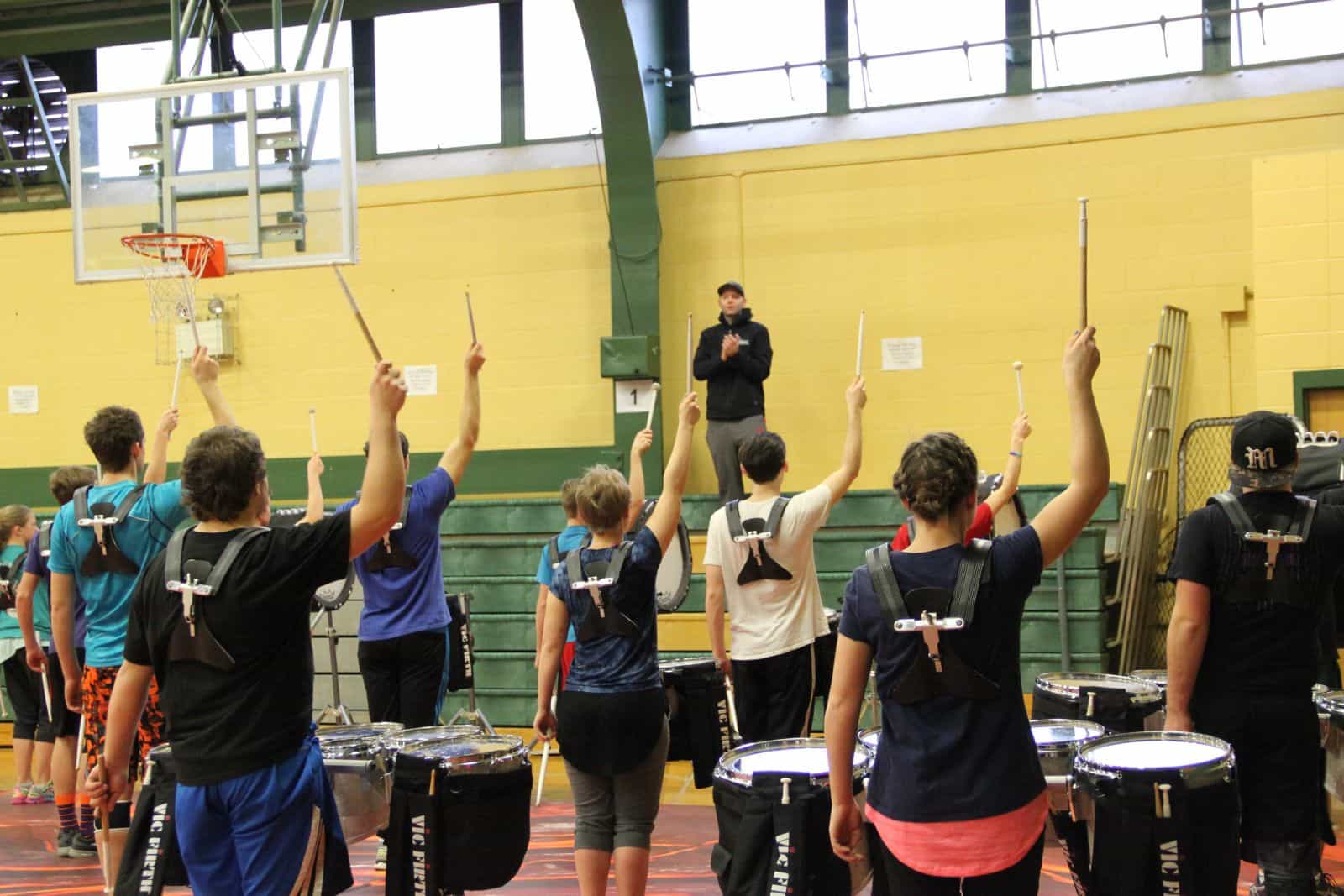