Allen Buell has a long history with WGI.  His ties to the organization go all the way back to the very beginning as he was involved with the Holley High School guard at the first World Championships back in 1978.  Since then, he has taught guards that have won nine medals, including Bishop Kearney’s five consecutive year title run in Scholastic World in the 1990s. 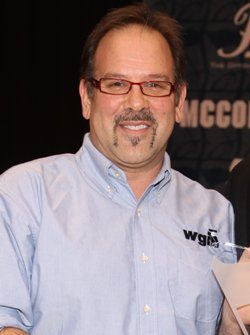 He began his announcing career by working at local circuit and regional shows, and has been announcing at World Championships for the past 13 years.  Buell stated what he enjoys most about the announcing experience is “knowing my voice sets off an eruption from the audience.  To see parents leaping out of the stands for their kids, I’m just happy to be a part of it.  When you get to the top three guards and your voice has to overpower thousands in the arena, it’s an incredible feeling.”

In addition to a past stint in radio broadcasting, his day job provides plenty of opportunities to use his vocal talent, as Buell is currently Director of Events at the Eastman Mansion in Rochester, New York, home of the Eastman Kodak Company.  He notes “Eastman House is most the renowned museum in world for motion picture film and photography.  I’ve had to do lots of public speaking.”

While the announcer’s job may seem easy, there are lots of moving parts that go into it.  He explained “you have to watch the Timing and Penalties judge and be aware of your surroundings.  For example, if something goes wrong with sound and it skips, you have to be there.  You steer the show from the tempo of how you speak.  If you get off, you as the announcer have the ability to push the show by talking a little quicker.  The tone and enthusiasm can make or break a show.”

Like the professional that he is, Buell continues striving to find ways to grow as an announcer.  “I listen to DVDs from past years to see how I can change my tone.”  Of course, there are some situations that challenge even the best of announcers.  With a grin, he shared “you have this horror feeling when you look down and see this 15 letter name.  When you screw it up once, you’ll never screw it up again. The last thing you want to do is have the finals performance and mess up their names.” 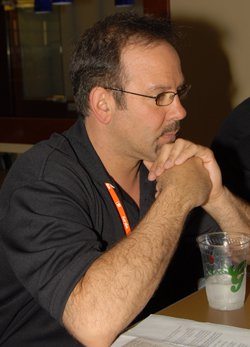 When his voice is not being heard in cavernous basketball arenas or at work in Rochester, Buell loves the allure of travelling.  “I travel all over the world.  I’ve been to Norway, Sweden, Denmark, and Brazil.  I like to spend time up north in French Canada.  I also like to enjoy my home.  I’ve been in Rochester all my life and love it.  There’s no place like home.”

Buell has a few words of wisdom for those who may want to follow in his footsteps someday.  “Listen and watch today because the people today have been doing for a long time.  You have to be comfortable and calm your nerves.  We’re in a little room and it is the most intimidating feeling in the world knowing thousands are listening. To sum it up:  Watch, learn, listen, and be calm.”