A show about creating a better life and new opportunities allowed members to portray their most vulnerable and authentic selves, proving that being a dreamer pays off in the end. The group finished in Dayton, Ohio, with a 95.325 and a gold medal in WIW finals. 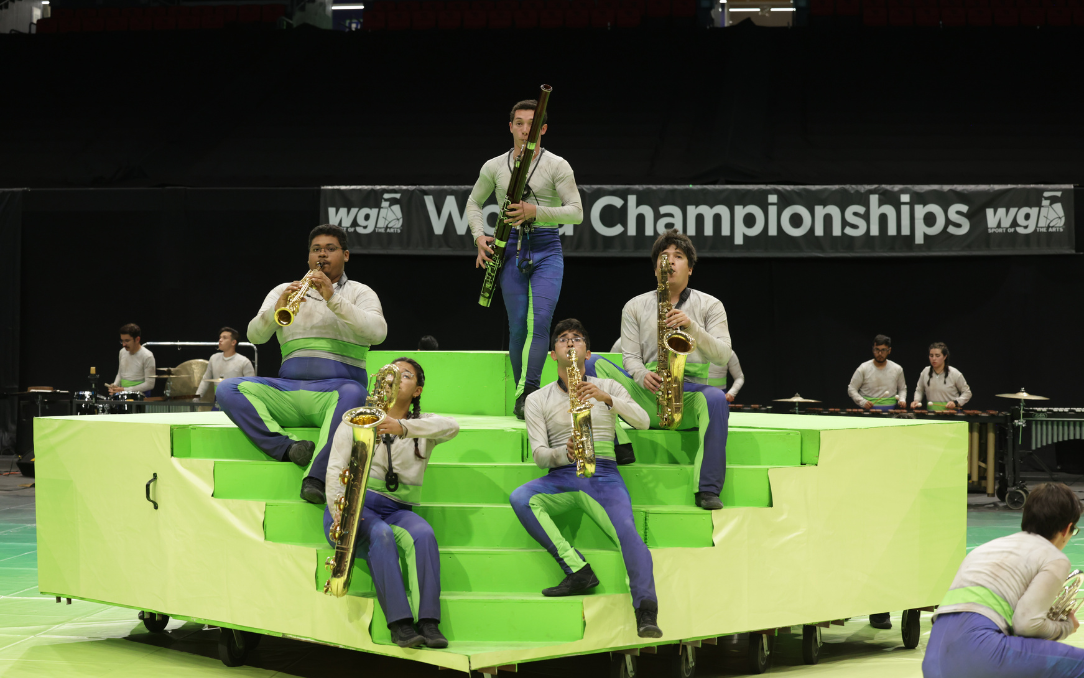 UTRGV Winds is set apart from other independent organizations by being affiliated with a university. Having this difference can create challenges, as well as benefit the ensemble. Chad Dempsey, the Visual Coordinator and Designer for UTRGV, said he has worked with other Indoor Winds groups in South Texas, including a few scholastic teams. Dempsey said one of the differences between the older students and the younger ones is the time it takes to pick up material.

“The [UTRGV] students are very responsive to instruction and application,” Dempsey said. “It takes a little more time for my scholastic teams to grasp and achieve.”

UTRGV offers many different paths for students to major in music ─ whether performance or education ─ and students in the winds organization utilize it well.

“The students are not just interested in performing,” Dempsey said. “They have learned they will be preparing themselves to be ready for this step as music educators.”

Although members of the ensemble must balance being full-time students with participating in a world-class organization, the university's gateway to knowledge gives them a standout quality in their performance. 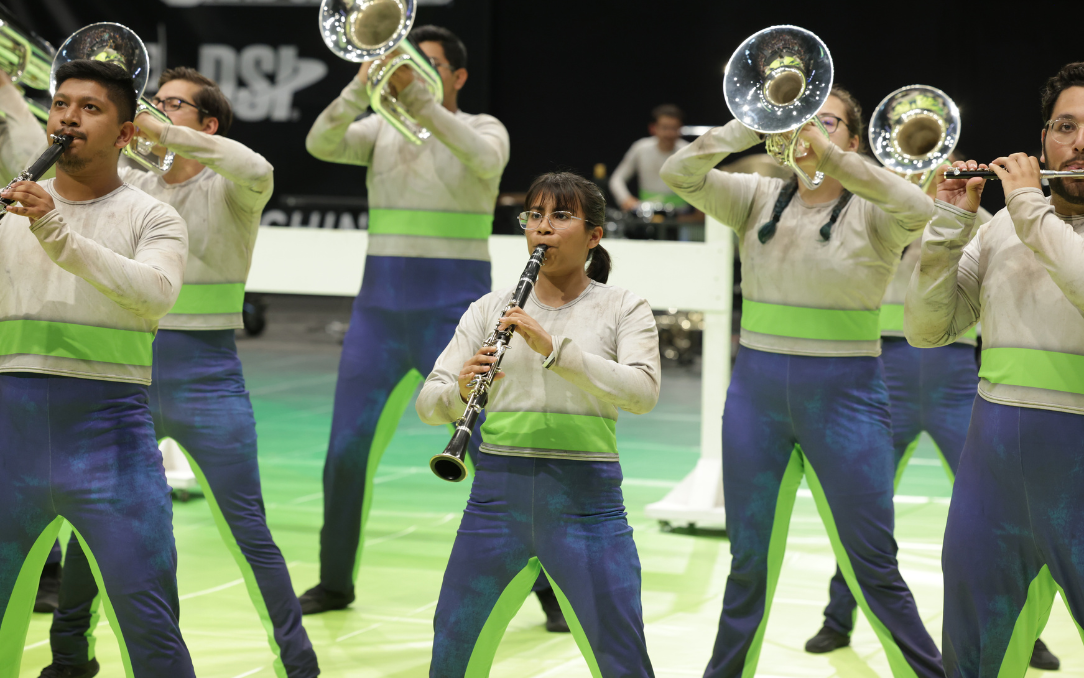 Portraying such a delicate topic required students to truly understand the show they were performing, Dempsey said. Putting their own experiences and heart into the production took until the end of the season to achieve, but it was worth it, growing the show to the next level.

“The overall design of ‘Viridius Pascua’ was intended to tell a story, showing the journey someone takes to become a citizen,” Dempsey said. “The musical selections and passionate performances from the students brought emotion to the audience as they were walked through the picture.”

As the show opened, horn soloist Rodrigo Barrera played John Lennon’s “Imagine,”  creating an image of the journey ahead. By the end of the show, visual soloist Lily Perez became the focal point on the stage. Perez was surrounded by the entire ensemble, ready to start her new life. Dempsey referred to the two soloists as “the embodiment of the show concept,” portraying the story of someone’s dream becoming a reality.

“These moments represent to everyone that the opportunities and trials are all worth it to achieve something more for everyone,” Dempsey said. 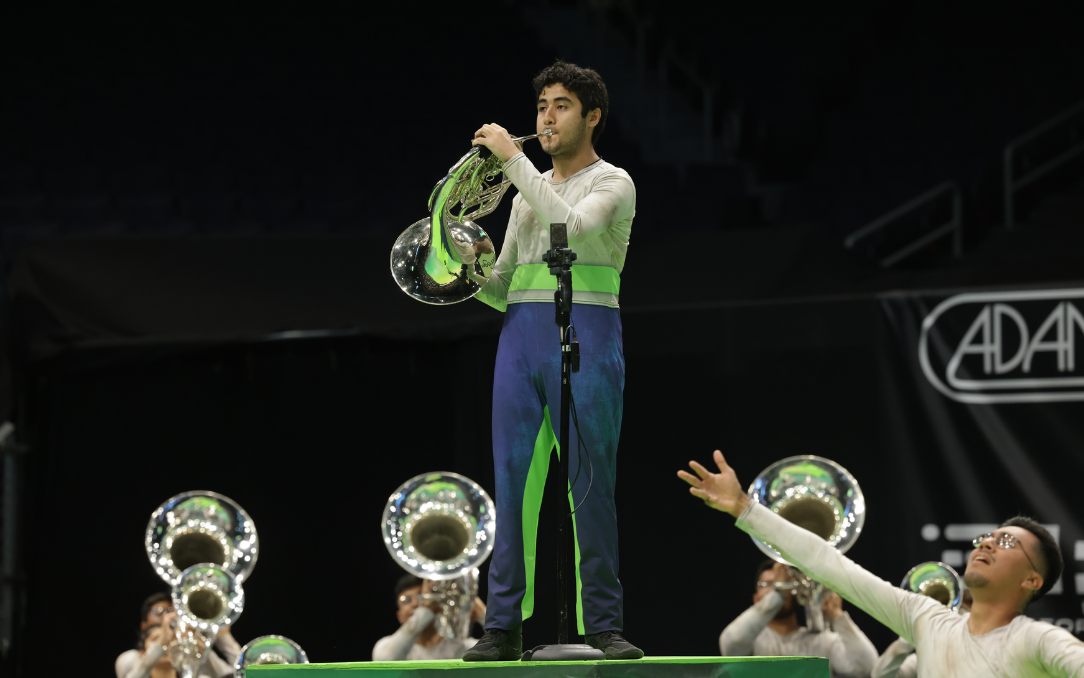 After COVID-19 prevented groups from performing, many were looking forward to being able to travel once more or even simply gather as a complete ensemble. Dempsey said the staff wanted to incorporate the lost years into something positive for the students while portraying the show themes at the same time.

“We really tried to take the lessons of 2020 and provide the performers with an outlet that they love and look forward to,” Dempsey said. “Most importantly, how can they tell the story of their show and find ways to suck the audience in.”

The accessibility and personal experiences of the students to the show concept grew the 2022 production to a new level. Students gave the show every part of them, in the best way.

“This [vulnerability] allowed the students to present who they are, how they play, and how they move,” Dempsey said. “Only their status is their ‘key’ to open the door to this opportunity.”

Kellie Finch is an undergraduate student at the University of North Carolina at Chapel Hill pursuing her BA in Media and Journalism through the Hussman School of Journalism and Media. At UNC, she is a member of the Marching Tar Heels in the tenor saxophone section. She participated in WGI winds during all four years of high school playing the alto saxophone, where she discovered her love for music and the activity through her experiences and the people she met.