WGI Winds, in its fourth year of existence, increased in numbers from 20 units in 2015 to 45 units at the 2018 WGI World Championships in Dayton. Units came from 20 states spanning the breath of America, earlier performing in fourteen regional events staged across the country. There was a great degree of variety among the competing ensembles, with some telling a story and others focusing on the music to convey the theme.

Several groups utilized props and sets and had complex floor designs, while others left their visual program stripped down. Many groups also had a small guard component. Most groups had a small stationary ensemble of percussion instruments, except more often than not set at the back of the performing area to keep the front visually open. Amplification of these instruments has made it possible to place them anywhere. 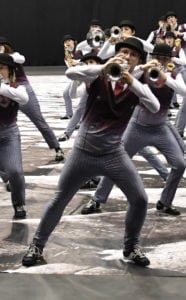 “The Barber” of Azle HS (Gold Medal – 94.875) began with a trombone quartet playing in barbershop harmony in front of a barbershop set, complete with barber chairs. Much of the music was based on Rossini’s “The Barber of Seville.” Visually, the concept was somewhat reminiscent of “Sweeney Todd,” with the barber taking a little too much off the top and leaving a customer without a head. It was a pretty serious turn of events for a show that started out so light and carefree.

The members of Mill Creek HS (Silver Medal – 91.475) gleefully explored life as if it were a roller coaster ride in “The Ride of Your Life,” a concept enhanced by a curved bank, a short hill, and a roller coaster car about to plunge down an incline. The narration pined for the days of youthful simplicity, seeking one last ride before adulthood closed off the fun of childhood. At the end, two members rode the roller coaster car down the incline, stopping at the front for one last childhood hurrah.

Edinburg North HS (Bronze Medal – 90.725) performed “In-Phi-Nity” atop a floor expressing the curved outline of a Fibonacci sequence. Various mathematic formulae regarding velocity, as well as algebra and calculus, were also painted on the floor. Numerals pasted on the back of the uniforms seemed random until the winds hit a block triangle, with the numbers in order. The show ended with “Make Our Garden Grow,” a song of hope in the future, perhaps a future where everything makes as much sense as mathematics. 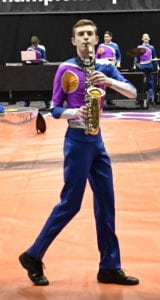 “This is My Dot” got our attention from the start with a vibrant floor of orange, blue, and purple dots. The music in the Miamisburg HS (4th – 88.775) show was quite diverse, from “One Man Band” from the movie, “Pollack,” to music from “Carnival of the Animals.” Charming and whimsical, the show was dedicated to pure entertainment while leaving the meaning of the dots on the floor and lifted high by the members at the end of the show up to our personal imaginations.

“Fool’s Gold” by Decatur Central HS (5th – 88.113) told the story of prospectors in the mid-1800s searching for gold “in them thar hills.” Some performers, clad in blue jeans, checkered flannel shirts, and straw hats, were pushed around the floor in mine rail cars. As the prospectors were sleeping, a thief tried made off with the gold that had been discovered. At the end, TNT was set off to bust a new vein of gold, with the stolen bounty revealed as being recovered.

Forsyth Central HS (6th – 86.550) “Ups and Downs” was performed on a floor with green and aqua arrows pointing down, with round moving platforms painted with black arrows pointing up. Ladders were utilized to raise soloists further up. Music largely of a jazz-rock nature made up the repertoire. An alto saxophone soloist was strapped inside the largest of the round platforms and spun so he was playing upside-down. There really were no “downs” to this show. Everything was a joyous “up.”

Elk River HS (7th – 78.600) started “Unmasqued” from behind a series of 18 walls, unmasking their identities when they revealed themselves wearing facemasks. The narration mentioned one had to reveal their true face at the beginning of “Hide and Seek.” A question was asked if we can put aside our similarities, inferring it’s best for people to be themselves, no matter where it takes them. All things considered, being just like everyone else is counter to a fulfilling life. 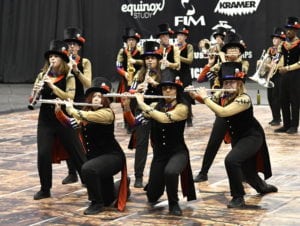 “Spellbound” of Chromium Winds (Gold Medal – 89.825) took a gander at how they do the voodoo that they do so well, exploring the dark side of the cultural form that is practiced by few, but feared by many. With ritualistic voodoo paraphernalia on display, a voodoo master tried manipulating a zombie through much of the show. But at the very end, the zombie turned the tables on the master, smiting him into another dimension and earning the respect of all who feared him.

In “The Other Side,” Horizon Winds (Silver Medal – 87.050) proclaimed that there are things known and things unknown, things that were hiding in the form of the members behind the 16 doors spread out in an arc across the floor. A longing for the things we used to know was expressed in the ballad of “Yesterday,” as well as optimism for the things in the future, things waiting on the other side of the door if we could only “Break on Through to the Other Side” and embrace the opportunities awaiting us. 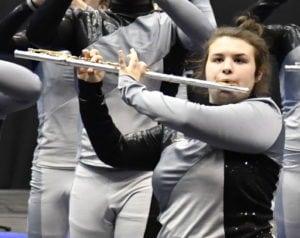 Point Winds Theater (Bronze Medal – 79.675) stated at the beginning of “Cloned” that the term is ab out trying to be like everyone else. To fight that lack of individuality, the line placed their 12 members of the stationary ensemble down the entire length of the right side of the floor, further revealing that the majority of those members were also horn players. At the end, we were reminded, “As long as you’re trying to be like everyone else, you can’t be the best version of yourself.

Atop a faded image inspired by the American flag and in the shape of the continental United States, the Kingsmen Indoor (4th – 76.425) show of “American Dreams” was a red, white, and blue salutation to everything grand about the USA. A running motif was the theme from “Fanfare for the Common Man,” as well as narrative comments of famous Americans extolling the virtues of America’s goodness. A tuba playing the piccolo part to “Stars and Stripes Forever” was a definite musical highlight.

Warner University Indoor Winds (5th – 71.875) performed “Get Out of My Jungle” in front of a rainforest backdrop, with guard members wearing skirts of leaves menacing all with long spears. Music was jazzy, leading to one member going full Tarzan and becoming a menace himself. Granted, one typically doesn’t think of jazz in the same breath of jungle music, but in a way difficult to comprehend, the incongruity of mixing the two elements seemed to be a genius move.