Have you ever wondered who puts together all those wonderful video moments at World Championships?  How do hundreds of different performance clips, backstage glimpses, and sponsor ads get seamlessly integrated into the fabric of the event?  Video Specialist Amy Racic is the talented person responsible for coordinating website video stories seen during the weekend and on the WGI website.

Amy got her start in the pageantry arts in her high school’s Winter Guard in Indiana, and later performed with the Capital Regiment Drum and Bugle Corps of Columbus, OH.  She majored in New Media at Indiana University, which involved graphic design and video editing.  She got a taste of her future career when an opportunity arose for a video internship with Drum Corps International.  She did interviews and helped with the video facet for DCI that summer. 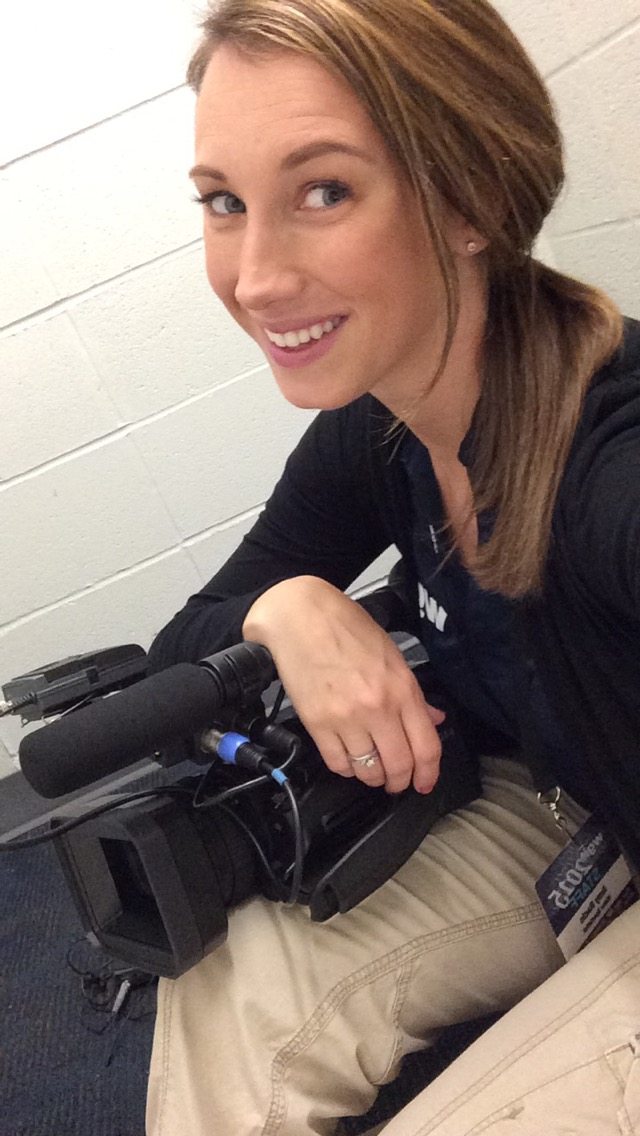 The video aspect of WGI was more limited in the days when Racic started her position in 2007.  She reflected on how her role has grown over the years.  “When I first came to WGI, I remember we just put up short clips of performances, but we didn’t really know how to put everything out there.  We did some interviews, but the video content is much larger now.   We have team of videographers that cover news stories, and try to get montages of all regionals.”

What exactly does Amy do during Championship week?  She elaborated on her duties:  “A lot of the things I do during Championships is video journalism.  I get news stories, montages, and news clips.  We do human interest stories and do behind the scenes stories.  I manage the webcast and make sure DVD copies are being made.  I also coordinate jumbotron schedules, which includes getting the sponsor list and making sure the ads get played a certain amount of times.”

Perhaps the hardest part of her job is finding time to get the work done in the allotted time.  She explained “There is so much going on its hard to find time to edit because I want to be out there shooting more stuff.  You want to capture everything but when the days are so long it’s hard to find time and energy.   That’s why we try to get a good team of shooters.  I get a team of video people to get footage while I’m editing.”

The most rewarding aspect of her role with WGI is the opportunity to introduce the world of color guard and percussion to those who have never seen it before.  “Video is a good vehicle to provide exposure to the activity and I’m part responsible for putting out that video that could draw more people.”  She added that her favorite time of the WGI season is “the week before championships because you can just feel the energy about to explode.  You’re excited about what’s about to happen!”

In her free time, Amy enjoys spending quality time with her children and family.  “I like doing outdoor things like parks, drive in movies, and canoeing.  I do freelance videos on my off time like shoot local marching band circuits and the occasional wedding but I have the dream job so I don’t feel like I have to pursue anything else to make myself fulfilled.  I have the coolest subject imaginable to shoot.  What better can you get than colors and music and energy?”