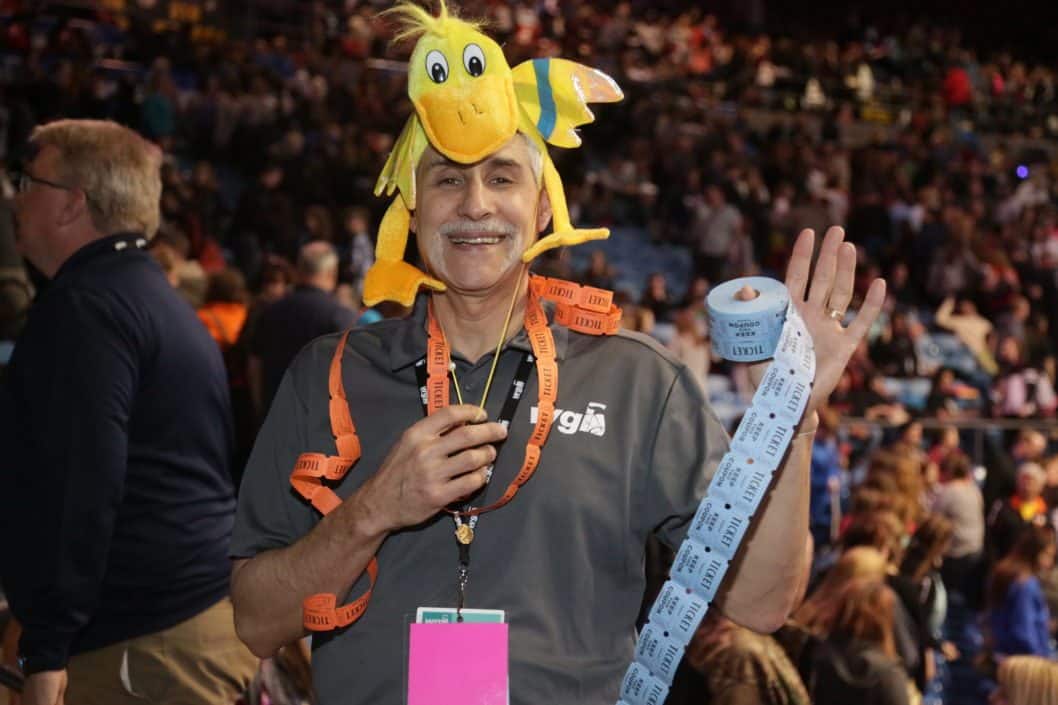 WGI fans will most likely recognize Howie and Vicki from their longtime service at the WGI World Championships. For over 25 years, they have been raising money for the WGI scholarship fund and volunteering for their local color guard circuit. Their hometown of Naperville, IL honored them this past weekend as the Labor Day Parade Grand Marshals.

As the story goes, and a lot have heard it a few times, a young Howie Mogil spots Vicki Pickell from across the football field spinning Baton with the Marching Band while they are both attending Northwestern University some years ago. In pursuit of Vicki, young Howie quickly learned to love the things she does and immersed himself into the world of Drum Corps, Marching Band, and Color Guard â€“ AND IT WORKED.

They both graduated with PHDs, married, and started sharing their now mutual love and affection of the Color Guard activity for now 40 years. Their love of the activity extends to all the children and families whom they have taught.

â€œWith their guidance, our children are self-confident professionals,â€ said Naperville City Councilwoman Patty Gustin. â€œCourtney is now an attorney and Lindseyâ€™s an Augustana graduate heading towards her teaching masters. Naperville is about kids. Kids need family. Howie and Vicky are and always will be Napervilleâ€™s most caring family members, for all of Naperville kids, and especially our kids.â€

Vickiâ€™s love for guard was fostered by her father, Jerry Pickell, who played saxophone in the Naperville Municipal Band. Then, as now, children of band members could learn baton twirling and march with the band in parades. 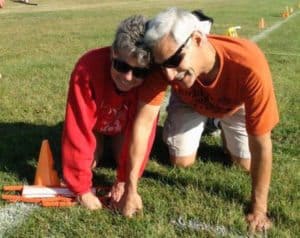 Vicki started marching in parades with the Naperville Municipal Bend when she was about 5. Her sister Katie (Pickell) Smith followed later. The woman who taught the twirlers was named Julie Earhardt; she was the director of the Steperettes, then sponsored by the Naperville YMCA.

When Julie Earhardt retired, Katie led the group until her sister took over the organization 1977. Under her (and Howieâ€™s) direction, the Steperettes Twirling Corps won state, national, and â€œgrand national/worldâ€ championships, and were invited to tour Spain. The transition to color guard began in about 1987, and the focus of the group has been on color guard exclusively since 1989.

Today the Program is sponsored by the Naperville Park District.

I have known the Mogilâ€™s for 15 years. The Steperetteâ€™s are so much more than a Park District Traveling Color Guard Program because of the leadership of Howie and Vicki Mogil. Through longterm support of the Naperville Park District, they help children and parents (in some cases) grow into fine individuals.

My husband Paul and I could not be more honored to have met Howie and Vicki. They have helped raise our three daughters, Veronica (now a Naperville Jaycee), Gabrielle, and Willow.

Howie and Vicki have impacted so many in Naperville, creating generations of confident and productive leaders.

Longtime member and past assistant coach Julie Dagenais said, â€œSteperettes taught me discipline, dedication, confidence and teamwork. And helped build lifelong friendships and connections with members, parents, family and staff. No matter the time that has passed or distance separating us, all Steperettes past and present will always be family.â€

The Naperville Jaycees are honoring the Mogilâ€™s (and the Steperette program) this year as the Labor Day Parade Grand Marshals, promoting their love for Naperville, Children, Families, and each other.

Take a look at this video of Howie from the 2009 WGI World Championships where he explains why he loves volunteering for WGI.