In our "WGI Archives" Feature Series, we take a look back at feature stories from past print copies of FOCUS Magazine! In this archive snapshot, first published in the Winter 2015 WGI FOCUS Magazine, we learn more about a few color guards that utilized winds and other instruments ahead of the launch of the WGI Winds division in 2015! 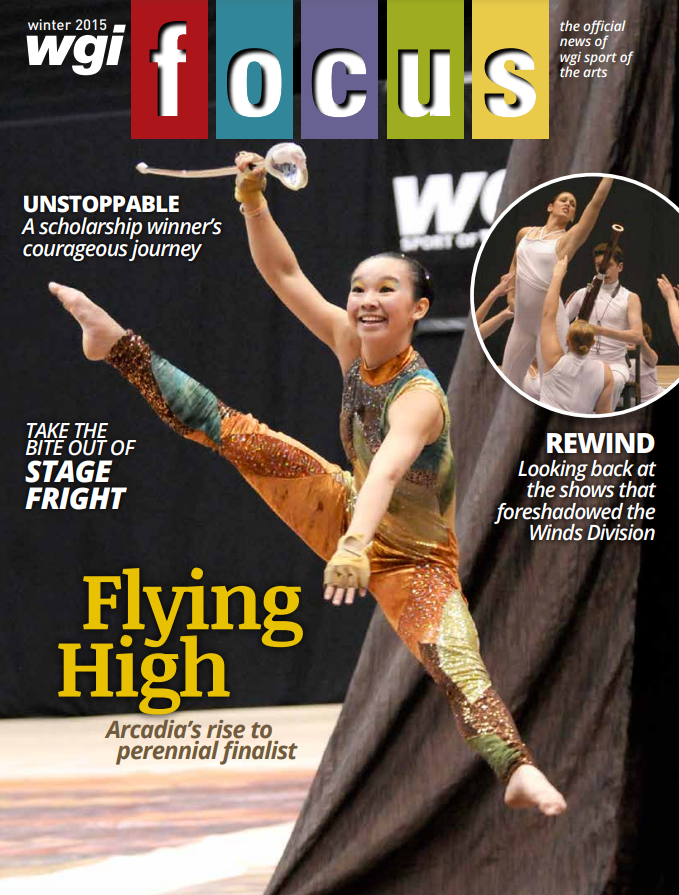 People are buzzing about the newly created WGI Winds Division. But while 2015 will be the first year in which brass, woodwinds, strings, electronic and other nonpercussion instruments will be judged in their own right, their use in WGI competition isn’t entirely unprecedented, thanks to some pioneering color guard shows of years past.

Well-integrated instrumentation helped Kennesaw Mountain become the first color guard to win a title while including a live instrumental performance. After a second-place finish at the 2004 Bands of America Grand Nationals, the guard built on its momentum with one of the most serene productions ever to grace the floor. Director Adam Sage, who had previously incorporated percussion into guard shows while leading the Company Winter Guard in the late 1990s, based Kennesaw’s 2005 show “Air” on J.S. Bach’s “Air on the G String.”

“The idea came when I was in Prague in 2004,” Sage says. “I went to a concert where a small ensemble played classical pieces. It was a moving experience, being in this small concert hall. When I heard the trumpet play ‘Air in G,’ I knew this could be something beautiful and that the Kennesaw girls could pull it off. I loved how the sophistication and elegance of the piece could bring out their abilities.” 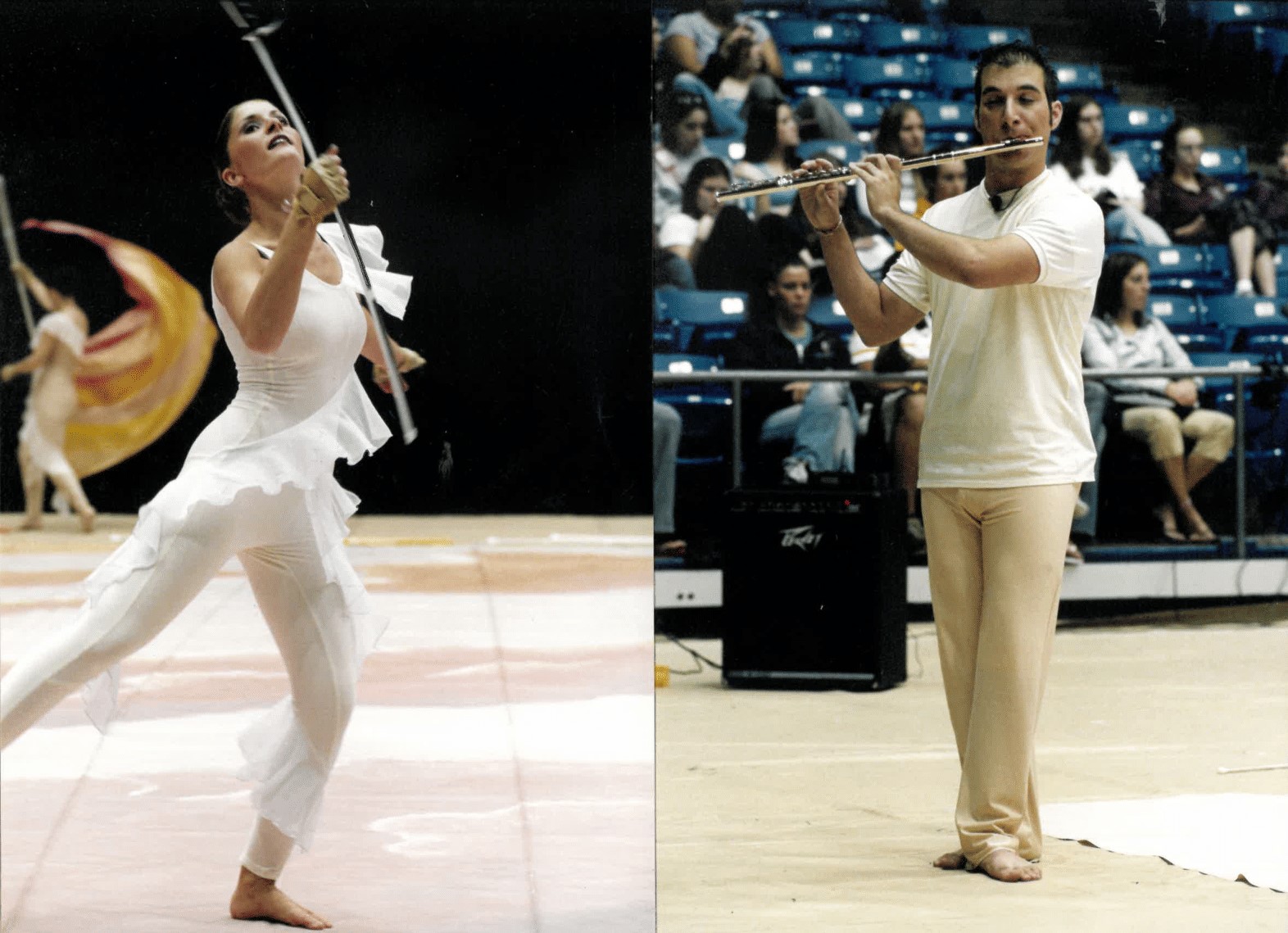 Instead of trumpet, however, Sage turned to Nick DiCillo, who was a flute soloist in the school’s marching band and wind symphony. “His ability to not only play, but communicate while producing such a beautiful sound really made the program very special,” Sage says. Rather than having DiCillo stand on the side and play, Sage wrote him into the show. “We had to make sure the equipment would allow him to move about the floor and be an active part of the program.”

The goal, Sage says, was to integrate the music with the visuals. “We chose the sunset colors on the floor as an inspiration of the sky,” he explains. “This was an aesthetic that we felt could connect beautifully to ‘Air.’ The colors for the flags started with a soft palette at sunrise, progressed through warm tones in the sky, and culminated with shades of yellow to not only bring out the midday sun, but also connect to the brightness of the piece at that point in the soundtrack. Nick began the show setting the mood and environment. We layered dance movement [in] the beginning to both Nick and sound effects of air and wind. He also played over the [recorded] soundtrack midway through the program, adding another layer. He could accent parts of the soundtrack while embellishing moments in the choreography.”

A flute can be mobile, but grand piano is a different story. In their 2011 production “Hope,” Trumbull HS used what looked to be a full-sized grand—an illusion created by some ingenious prop design. “We placed an electronic keyboard in the shell of a baby grand piano, so we were able to amplify the sound through speakers that were placed around the piano on the floor,” says director Ray Rhodes. “We set levels with the sound engineer at each show that would match the levels we set for the pianist. She was also able to adjust volume from the floor when needed.”

Rhodes says the group had decided to involve pianist Jessica Plude even before finalizing its show design. “Our soloist is a gifted musician. She took a stark soundtrack and actually wrote the piano parts that she played to accompany it. We recorded her playing the piece in the event she was unable to attend rehearsals, but she played live at each performance.”

Having a grand piano-sized obstacle did present some staging challenges, however. “We designed the floor and programmed the show with the pianist as the centerpiece,” Rhodes says. “Show designer John Lemire did a fantastic job utilizing the space on the floor to move the performers around the piano and bring it into focus during sensitive places in the music. We did have power cables to contend with, but we did our best to conceal them. Truthfully, setting up all the electronics before each performance was probably the most nerve-wracking part of the show for me. I can sympathize with our percussion ensemble friends who set up multiple electronic devices and amplified instruments on a regular basis!”

The floor for that program was designed to look like a large ribbon, echoing the ribbons worn by people supporting important causes. “Several of our staff members and students faced some pretty tough losses over the course of a couple of years leading up to the 2011 season, and others were dealing with friends and family members who were battling various serious illnesses,” Rhodes says. “We were inspired to celebrate and to pay tribute to them.” 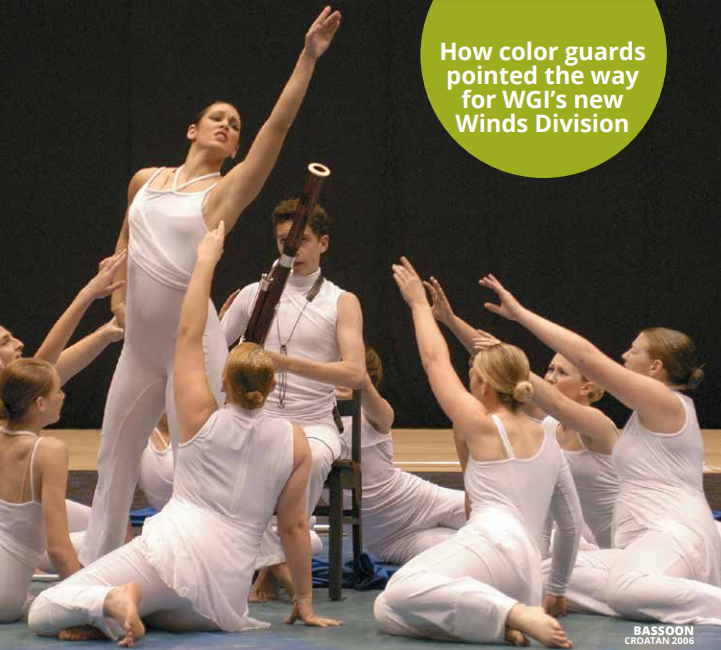 The show’s combination of music and imagery made a deep emotional connection, moving both performers and many in the audience to tears. “This show was the first opportunity many of our members had to really experience how color guard performance can be about more than just putting on a show for a crowd,” Rhodes says. “They were paying tribute to some of the most special people in their lives ... The tears were coming from a pretty raw place.”

Ultimately, the playing of DiCillo, Plude, and other pioneering instrumentalists didn’t show up directly on the scoresheet. But they all added something special to their groups’ performances.