Every year, there is a pilgrimage to Dayton, Ohio.

Through sprawling midwestern suburbs, past forests of spindly black trees denuded by the winter, over smooth open highways, thousands of members of the WGI Community—sponsors and vendors, volunteers, staff,  performers, educators, designers, families, and fans—flock to the University of Dayton Arena.

We come in planes, over oceans, in buses packed with clanging equipment, in rental cars and vans that follow Edwin C. Moses Boulevard along the curve of a sparkling reservoir to a mecca of sorts, where a year of planning, months of sweat and probably tears, and countless hours of dreaming come to fruition. We catch our first glimpse from the I-75: the familiar silhouette of the arena, tucked into the quiet folds of Ohio, about 3 miles from Downtown Dayton.

As we turn off the familiar stretch of the bridge, we see it: the red brick exterior, the white pointed edges, and the gleam of plate glass windows as we roll by. We know the way it looks when the parking lot is slick with rain and the way our shoes sound on the glossy tile when we walk in. We know the buzz of the arena and the flutter we feel in our chest when we catch our first glimpse of a performance on the televisions that line the hallway. We know the way voices ricochet off one another at the top of the tunnel when a group emerges in a post-performance glow.

We know the sticky sweet taste of the oranges, handed out with lovingly gloved hands and warm congratulations. We know the texture of the seats beneath us and the way the shadows rest at the peak of the arena, making it look twice as cavernous as it actually is. We know how it feels to stand at the top, take a breath, and pray that our students experience greatness. 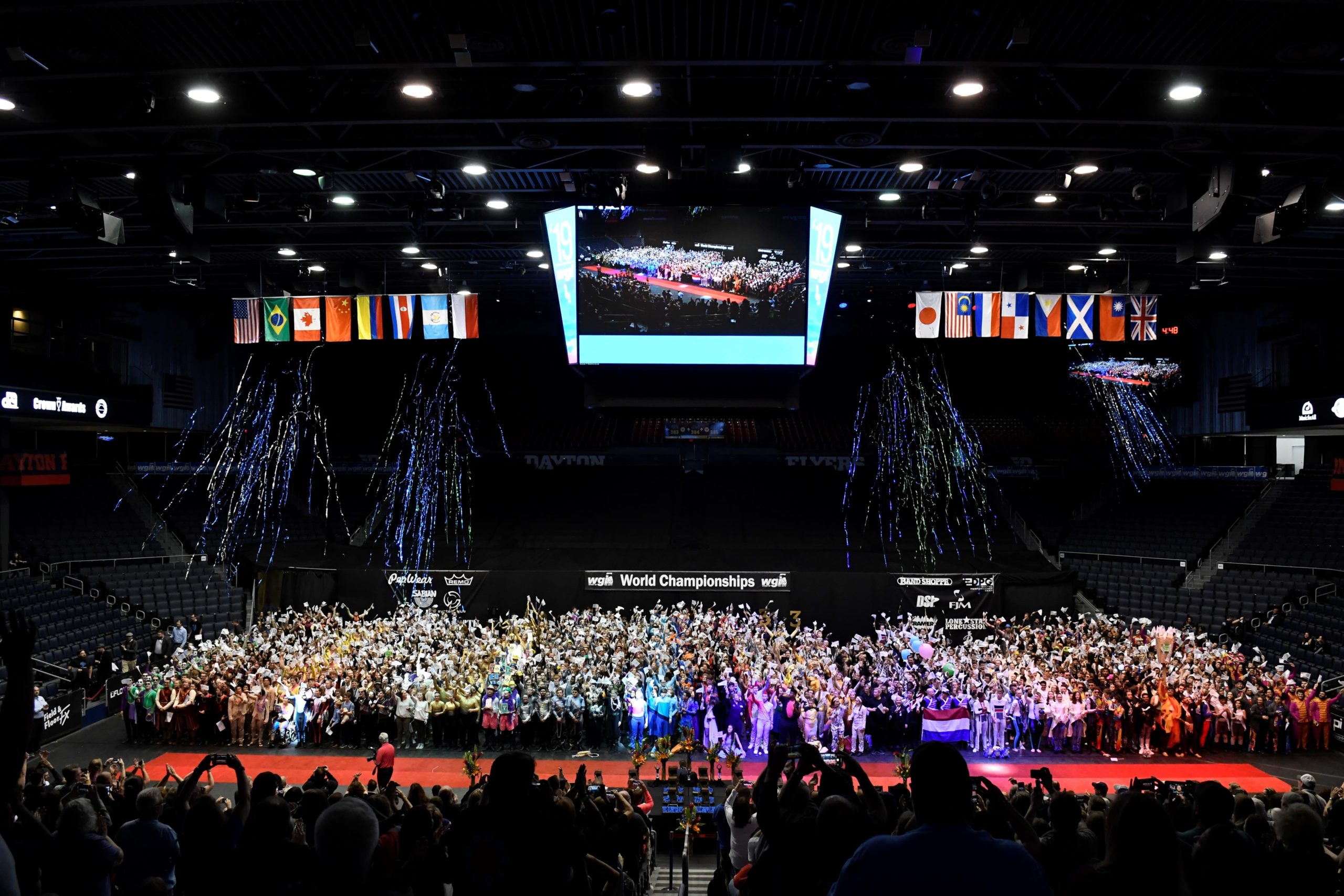 Maybe, we know the special quiet of the stairwells of the arena, where the behind-the-scenes staff hasten between tasks. We know how thick the air feels in the arena on an unseasonably warm day in spring—the way heat and sound meld into a tangible wall when we stand on the precipice of performance. There is a hallowed lipstick-stained wall on our right, a sleek cement ramp under our bare feet, and in front of us an arena, filled to the brim with electric potential.

We know the exceptional way the confetti catches the light and the way the room is rich with love and a blur of conversations we’ll wish we could replay tomorrow. We know the extraordinary stillness of the empty arena and the rustling of confetti being swept from the floor as thousands of us start to make our way back to where we have come.

There are many ways to see the University of Dayton Arena, home to the two-week zenith of the indoor marching arts. In the face of the current worldwide pandemic, though, there emerges yet another way to see the UD Arena—as just an arena. 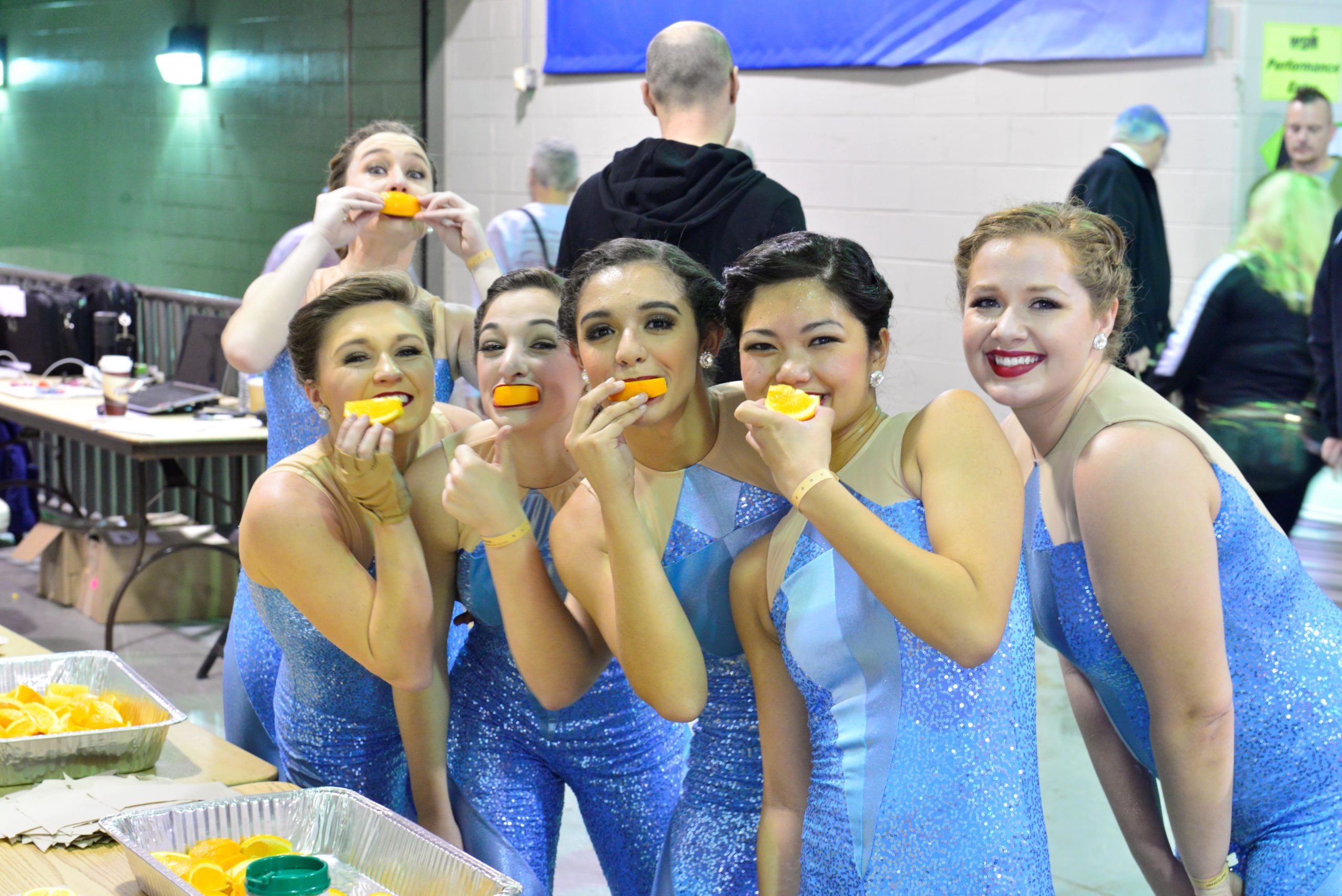 In these unprecedented times, COVID-19 has isolated many and relegated most to our homes for nearly 100 days. Stripped of Championships Week as we have come to expect it, it has become clear that WGI is defined by the hands that build it, rather than by the building that houses it.

This was the premise behind WGI’s inaugural #IAMWGI Day, which was held on April 4, 2020. Hosted virtually over WGI’s social media accounts and wgi.org, the event included a full day of events designed to highlight a sense of community. Over the course of roughly eight hours, there were nostalgic watch parties spanning decades of content, scholarship announcements to celebrate the outstanding performers of WGI, and a slew of giveaways and merchandise opportunities within WGI’s virtual merchandise tent.

#IAMWGI Day was designed to celebrate the people that imbue WGI with the magic we know and love. Much like the traditional championship events, the tireless staff at WGI logged weeks of hard work to create a virtual space for WGI to commune.

Of the event’s inception, Marketing Manager Trevor Jordan says, “We still wanted to create a space for the WGI Community—including performers, instructors, designers, families, fans, staff, volunteers, sponsors and vendors—to come together and celebrate each other and the marching arts as a whole.”

When restrictions surrounding COVID-19 made WGI Finals an impossibility, “the whole community was devastated,” Video Specialist Amy Racic says. “The WGI office immediately started to think of ideas to lift the spirit of the indoor community.”

Special Projects and Staffing Coordinator Julie Noble recalls the beginning of the process: “We started planning the morning of March 12, the day following our announcement to cancel World Championships.” She says, “Trevor and Amy had an idea of what direction they wanted to go in, and the three of us brainstormed for a few hours together at the office.” 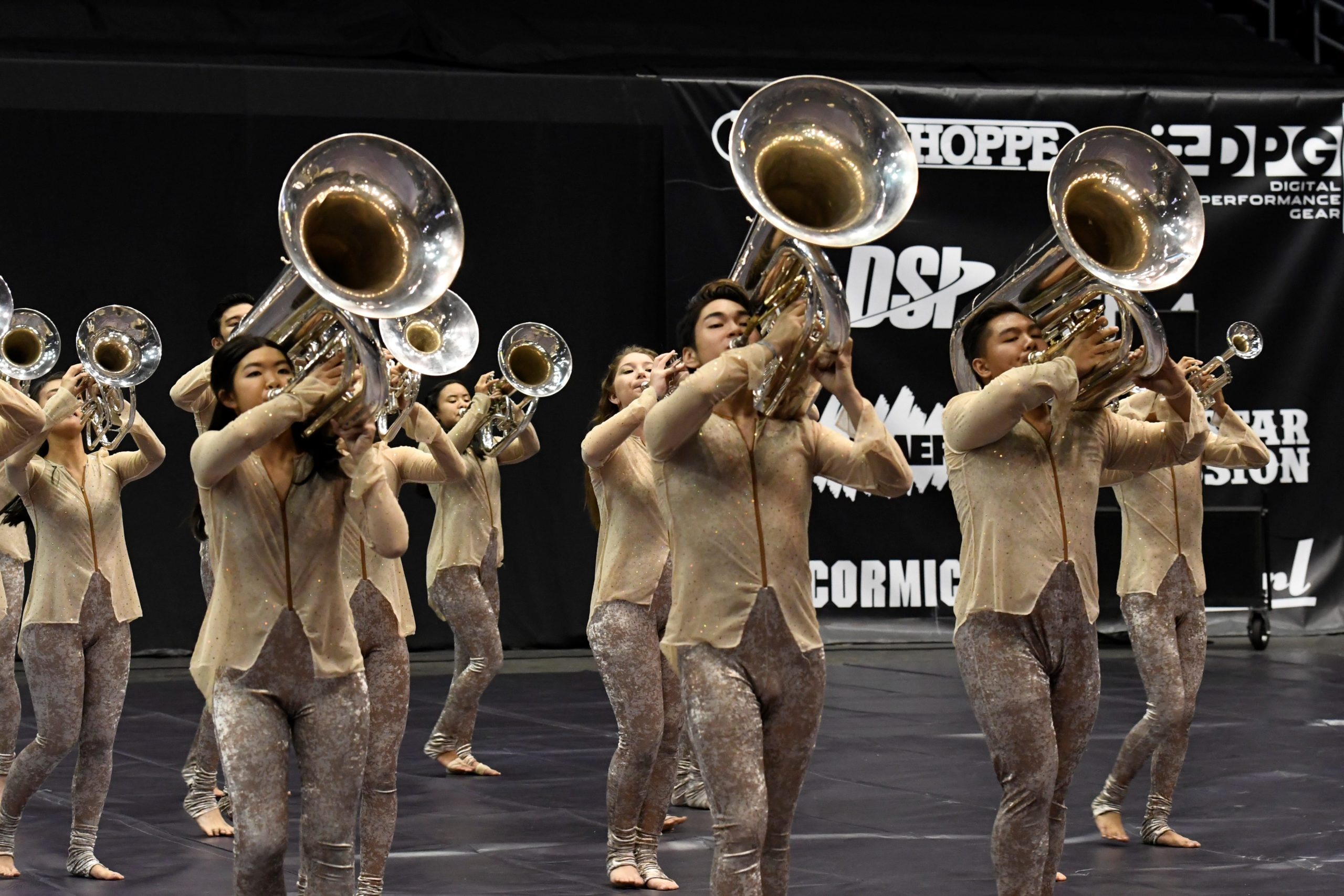 With an accelerated timeline, the team needed to move quickly to provide a virtual respite for the WGI Community. “Everything came together in a matter of a couple of weeks, from ideation to implementation,” Trevor remembers. “Although we had a designated #IAMWGI team, every single person in our office contributed in some way—it was an awesome team effort.”

“Everyone that works in the WGI office has a personal connection to the activity and had great ideas about ways to make #IAMWGI Day unique and special,” Amy adds. “Creating a whole new virtual celebration experience in a short amount of time was both challenging and exciting.”

WGI Championship events often mean extremely long days for the staff. The virtual event proved to be no different, says Julie: “Many of us worked as much during those few weeks as we would have during World Championships, where it's common to put in 7-day work weeks and 14-16 hour days.”

The event drew hundreds of thousands of viewers and a flurry of social media interaction. “It was amazing to watch everyone in the WGI Community come together to celebrate their love for the indoor marching arts, and it felt so great to be able to provide that outlet for them,” Trevor says. 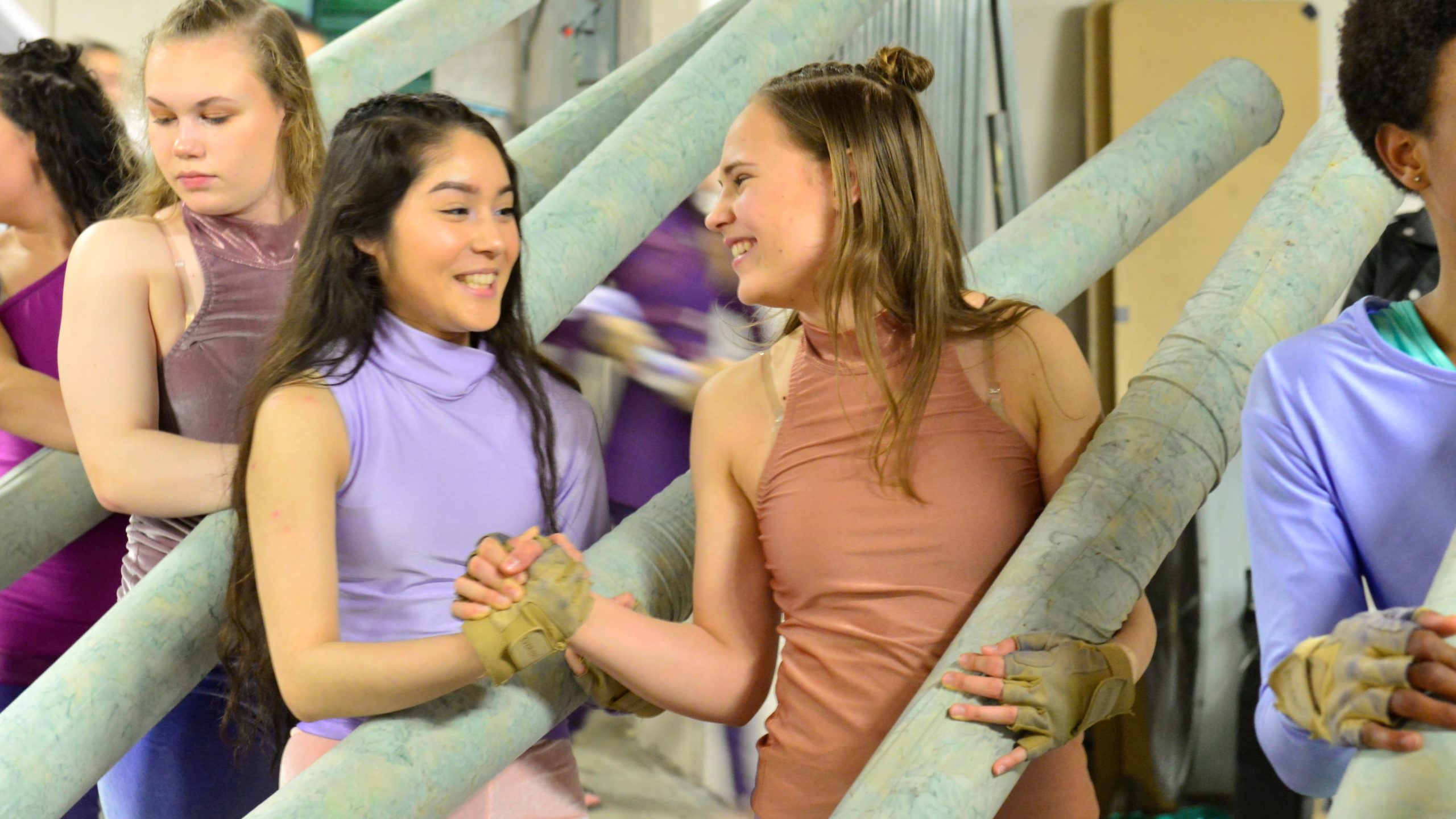 Having been involved in the indoor activity since the 90s—then, as a performer, and now, as a parent of both guard and percussion performers—and closely managing a fleet of WGI volunteers, the loss of World Championships was emotional for Julie. She described the event as therapeutic: “Being able to direct my time and energy into an event that would bring people together was so helpful.” She says, “I loved the day because it highlighted what is true for me—that the most important experiences I have related to WGI and the indoor activity don't involve me being on the performance floor.”

A 13-year veteran of WGI’s staff, Amy echoes the positivity of the experience. “#IAMWGI Day has made us all realize what this activity means,” she says. “[It] allowed a sense of togetherness though we couldn't be physically close.” In the age of COVID-19, finding ways to connect has been more important than ever.

Trevor describes a beautifully simple concept that came to fruition through collective love and fortitude: “Our goal was simply to bring everyone together online: to hold an event to acknowledge that every individual that makes up the WGI Community is WGI—more than a single event, score or arena ever will be.”

At the end of an #IAMWGI Day promotional video, in the glow of which we can remember watching in the alive dark of the UD Arena during closing ceremonies, a simple message fades into view: “I am not a score. I am not an arena. I am not an event. I AM WGI.”